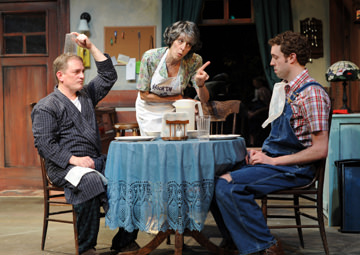 Auditions for The Foreigner by Larry Shue (Fall studio show)

Synopsis:The Foreigner is a fun, two-act comedy by American playwright Larry Shue. The story takes place in a fishing lodge in rural Tilghman County, Georgia where two Englishmen, Froggy and Charlie, arrive as guests. The shy Charlie agreed to accompany Froggy on the trip after his sick wife begged him to go. When people at the lodge try to talk to Charlie, however, he remains silent: he is terribly shy, depressed about his wife’s illness, and cannot find the words to reply. Froggy claims that Charlie cannot talk because he is a “foreigner” from an exotic country, and does not understand English. Taking the explanation that he’s a non-English speaker as fact, the lodge’s guests quickly begin revealing their secrets, and Charlie soon discovers scandals amongst some of the residents of the lodge.

British (dialect required)
Froggy is well-fed and flushed with the spirit of adventure. His cheerful patter puts us in mind of those salesmen
we have heard in Portobello Road. He is a career military officer in the British Army, and a longtime friend of Betty Meeks and Charlie Baker.

British (dialect required)
Charlie seems quietly, somehow permanently, lost.
His has a sad, thin face. For twenty-seven years he
has worked as a proofreader for a science fiction magazine. His wife, Mary, considers him shatteringly, profoundly boring. Mary is back in England, gravely ill in the hospital. He’s often wondered: “how does one acquire personality? What must it be like, to be able to tell a funny story? To arouse laughter. Anger. Respect. To be thought—wise?” He’s not good at making idle conversation. He has an active fear of talking.

Born and raised in Georgia.
David is engaged to Catherine Simms. He has a friendly, open face. He is neither the stereotypically pallid, remote young divinity student, nor the hearty, backslapping evangelist. He seems rather to be a regular fella— humorous, and open, and, it would appear, a good young man to have on our side.

Born and raised in Georgia.
Ellard is Catherine Simms’ baby brother. There doesn’t, we must admit, seem to be much him. It took Ellard three years to learn to read. He is a lumpy, overgrown, backward youth, who spends much of his time kneading something tiny and invisible in front of his chest.

Born and raised in Georgia.
Owen is the newly appointed property inspector for Tilghman County. He has a dank presence. Psychologists tell us to beware of a man with two tattoos. One, he may have gotten on a drunk or a dare. But two means he went back. Owen is a two-tatto man. Twenty years ago, he was a soldier in the Vietnam war.

Born and raised in Georgia.
Catherine is engaged to Rev. David Marshall Lee. She was a debutante one year ago. She is Ellard Sims’ older sister, and his guardian after their father died. Their father’s will stated that if she thought Ellard were smart enough to handle it, she should give him half the family money.

Born and raised in Georgia.
Betty speaks the hardy local Georgia dialect, and, like everyone, is wise about some things and naive about others. She is a chatterbox. She is the owner of the Meeks’s Fishing Lodge Resort – a log farmhouse that used to be the home for her and her husband; her husband died a few years ago. She is a longtime friend of Froggy LeSueur.