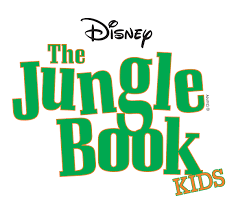 Banished by the ferocious tiger, Shere Khan, a human boy named Mowgli and his panther friend, Bagheera, are on the run in the deepest parts of the jungle. On their journey, the two meet a sinister snake named Kaa, a herd of elephants and a giant bear named Baloo, who teaches them the swingin’ musical rhythms of the jungle. After surviving a dangerous encounter with a band of monkeys led by King Louie, Mowgli and Bagheera are forced to run for their lives. When Shere Khan returns, our heroes must rally their fellow animals into battle and restore peace throughout the jungle.

Mowgli
Mowgli is a boy who gets along with everyone and who is very likable. He has a joyful and curious nature, and a twinkle in his eye.
Bagheera
The role of Bagheera, the panther, is not gender-specific.
Baloo
Baloo, the bear, provides much of the comedic relief in the story. Baloo’s part in “I Wan’na Be Like You” demands a singer with a strong sense of rhythm.
Kaa
Kaa, the snake, supplies threat and danger to Mowgli’s journey out of the jungle.
Shere Khan
Shere Khan, the tiger, is King of the Jungle.
Colonel Hathi
Colonel Hathi, the elephant, is in charge of the elephant brigade. but is also a little forgetful.
Elephant Troupe
The Elephant Troupe can have as many or as few actors as you like, but cast enough to make it look like a brigade – at least eight.
Baby Elephant
King Louie
King Louie is King of the Monkeys.
Old Monkey
Monkeys
Jungle Chorus
The Jungle Chorus is your ensemble of singers, actors and dancers.
Coconut Tree / ShantiShanti is the girl who takes Mowgli to the village at the end of the story. She is hiding in the jungle the entire time disguised as a Coconut Tree.
Register for auditions at this link:
https://www.hisawyer.com/apex-theatre-studio/schedules/activity-set/99570