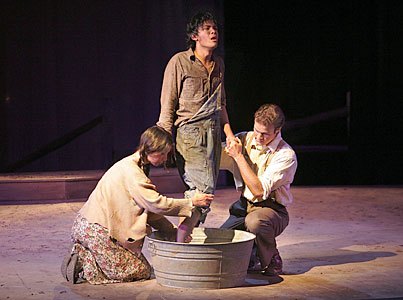 This marvelously theatrical play is the story of a young man and his friendship with a disenchanted preacher in southern Indiana in the early 1930s. When the boy was young he almost drowned. This trauma, and the loss of his mother in the same accident, has left him deathly afraid of water. The preacher, set on breaking away from a long line of Kentucky family preachers, is determined not to do what he does best.
“The playwright’s warmth, humor and love for humanity permeate the drama, and make it both touching and entertaining.” – Variety

Register for auditions at this link: https://www.hisawyer.com/apex-theatre-studio/schedules/activity-set/99571

BUDDY LAYMAN:  m. The town’s idiot-savant. He has the gift of water divination, on which the town depends but makes some uneasy. He is sincere but slow, with a strange quirk in his speech. His mother died saving him from drowning as a young child, and he is always looking for her. His is curious, imaginative and innocent, excited by the world’s magic. He is gentle and easy going, until confronted with water. His intense water phobia causes several complete breakdowns. This leads him to suffer a serious case of ringworm with severe itching.

JENNIE-MAE LAYMAN:  f. Buddy’s sister. Gentle and kind, she had to grow up too fast when her mother died. At times exasperated by her brother, she loves him sincerely. She is incredibly patient and understanding with his quirks, and defensive of him even to her friends.

FERRIS LAYMAN: m. Buddy and Jennie-Mae’s father. A mechanic. He is serious and worried, struggling to raise his family alone during a time with no work. He is a good man and a good father- still playful with his son, and still in love with his dead wife. He likes to blame Pres. Hoover for all the wrongs in the world. “I raise kids like weeds. You can pull ‘em or trim ‘em or hedge ‘em on back some, but you’re best off to just leave ‘em go. You ever seen a weed that ain’t healthy?”

C.C. SHOWERS: He is a backsliding preacher from Kentucky who drifts into town looking for work.Willing to work hard and do anything, except preach. Despite his separation from the church, he hasn’t lost his inner faith or his goodness. He treats Buddy with respect and takes him seriously from the start. The two develop a playful friendship that,combined with CC’s patience and reason, begins to help Buddy wash himself, and heal the ringworm. Though he quit preaching, he slides easily into the fast-talking style when he gets passionate.

NORMA HENSHAW: f. Owner of the Hoosier Dry-Goods. An overzealous and true believer, she is convinced the preacher has arrived to bring the Lord back to her church-less town. She pushes CC to heal the boy. Believes dancing is a sin. “Without a Church here in Zion I don’t know where we’re goin’…but that’s gonna change! With him layin’ on hands now and healin’ folks, he knows the Lord’s with him you see?”

DARLENE HENSHAW: f.  Young, flirty, sneaks out at night to “find trouble.” A bit of a gossip who succumbs at times to peer pressure, but mostly a good kid. She has a budding romance with Dewey. Believes everything her aunt tells her about the Bible, without truly understanding it. “And the thing about Adam and Eve is they’s walkin’ around picking berries and junk with no clothes on!”

GOLDIE SHORT:  f. Owner of the Dine-Away-Café. Pretty, but pushy, according to Ferris. She is a woman of principles, a bit of the town “Mom” safeguarding its citizens with a sign with 2 rules in her diner “No Cussin’ and You Pay Before You Eat.” She’s on board with Norma’s pushing for achurch, but not quite so zealously. “A Church back in town’d be darn good for business.”

BASIL BENNETT: m. A farmer and the local doctor-of-sorts. A hard worker, struggling with lack of rain, he takes everything in stride. Salt of the earth, hates technology, kind and soft. He is a good blend of realistic and optimistic. He respects Buddy and depends on his ability, even if he doesn’tunderstand it.

LUELLA BENNETT:  f. Basil’s wife and a doubter of almost everything. She is skeptical ofBuddy’s abilities and character, and critical of Basil’s acceptance.

MELVIN WILDER: m. A farm hand. A bit lazy, but not terrible. Plays big brother to Dewey, coaching him on flirting and dancing. Brings a flask out at night, during Prohibition.

DEWEY MAPLES:m. A farm hand. Wide-eyed about the world, unfocused at work and at play. But a good boy. Wants to take Darlene to a dance but has no idea how to talk to a girl. “I can’thardly breathe without gettin’ in trouble. I can’t romance or dance and now I can’t even work right.”