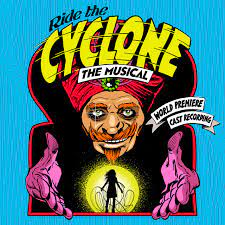 Auditions: Ride The Cyclone (Winter musical, ages 14 and up)

In this hilarious and outlandish story, the lives of six teenagers from a Canadian chamber choir are cut short in a freak accident aboard a roller coaster. When they awake in limbo, a mechanical fortune teller invites each to tell a story to win a prize like no other — the chance to return to life. A funny, moving look at what makes a life well-lived!

OCEAN O’CONNELL ROSENBERG (FEMALE)
The leader of the group, relentlessly competitive, sometimes cruel, though she sees herself as a virtuous person; high Broadway mix, with a pop quality; big range.

Adopted from the Ukraine as a teenager; he has thick Ukrainian dialect and a lot of rage; he is obsessed by Gansgsta Rap (an enormous fan of the auto-tune phenomena); there is a hidden, soulful romantic side; Baritenor with the ability to sing lyrical Ukrainian folk music as well rap.

NOEL GRUBER (MALE) the only gay kid in Uranium; never had a relationship; obsessed by French New Wave cinema, he has fantasies of dying a tragic death. Must be able to sing in the style of a French chanteuse.

RICKY POTTS (MALE)
Begins the play wordless and on crutches; suffers from a degenerative disease that has left him speechless and mostly immobile; he discovers at the beginning of the play that in this strange purgatory, he has regained all of these abilities. Baritone rock voice; basic accordion and/or tumbling a plus.

CONSTANCE BLACKWOOD (FEMALE)
Overweight, and outwardly okay with it, but there is a very deep self-loathing. Will do anything for Ocean’s friendship and allows herself to be used as a doormat; dubbed “the nicest girl in town,” a title she secretly despises. Very likable comic actress; alto belt, with a rock edge.

JANE DOE (FEMALE)
She was decapitated in the accident and no one claimed her body; even though she isn’t headless in the piece (but often carries around a headless doll). She reacts in a literal way and largely without emotion, almost robot-like; the other contestants are totally freaked out by her.